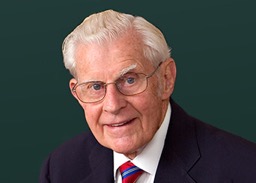 Lorenz E. Zimmerman, MD (1920 – 2013) SILVER MEDALIST, 2008 Recognized as a brilliant physician and founder of modern ophthalmic pathology, and well-regarded author, scientist, most generous teacher and influential mentor. His seminal contributions relate to retinoblastoma, ocular melanoma and other intraocular tumors.   Recognized as the founder of modern ophthalmic pathology, Dr. Zimmerman dedicated his life to the study of the pathologic basis of ocular disease. As a scientist, investigator, writer, but most significantly as a teacher, no physician has had a greater impact on ophthalmic pathology. Dr. Zimmerman trained over 50 fellows in the field of ophthalmic pathology, presently practicing worldwide.  Born, on November 15, 1920, and raised in Washington, DC, Dr. Zimmerman completed his undergraduate and medical degrees at the George Washington University and a general pathology residency at the Walter Reed Army Medical Center in 1950. He was then appointed as the pathologist in charge of a field hospital pathology laboratory in Korea where he served until 1952. For this service, he was awarded the Bronze Star and the Legion of Merit.  In 1952, Dr. Zimmerman returned to Walter Reed Army Medical Center, Washington, DC, and was appointed to the Armed Forces Institute of Pathology (AFIP). Although he had not had specific training in the pathology of the eye and ocular adnexa, he eventually became Chairman of the Department of Ophthalmic Pathology in 1954. This was the start of a 52-year stint at the AFIP, during which time he was a prolific author, lecturer, and teacher.  Dr. Zimmerman was co-author of the original Hogan and Zimmerman Ophthalmic Pathology text, first published in 1962. He contributed to subsequent editions, and the latest, Spencer’s Ophthalmic Pathology, is now 4 volumes. He also authored over 300 articles in peer-reviewed journals, many of which are landmark contributions. He delivered over 80 named lectureships including the 1960 Jackson Memorial Lecture. The American Academy of Ophthalmology created the Lorenz E. Zimmerman Annual Lecture in his honor. He was a founding member of the Verhoeff Society for Ophthalmic Pathology; in 1998, to recognize Dr. Zimmerman’s contributions, the Society voted to change the name to the Verhoeff-Zimmerman Society.  Organizations from all ophthalmic sub-specialties have honored Dr. Zimmerman. He has been the recipient of numerous medals including The Ernst Jung Prize for Medicine, the Helen Keller Prize for Vision Research, the Pisart award, the Donders Medal of the Netherlands, and he is the only non-ophthalmologist to receive the Lucien Howe Medal of the American Ophthalmological Society. He was also voted by his peers to be one of the 20th century’s ten most influential ophthalmologists. Dr. Zimmerman holds an honorary degree from the University of Illinois.  In honor of his distinguished career and contributions to ophthalmology, he was the 2006 American Academy of Ophthalmology Laureate and the 2008 Marshall M. Parks Silver Medalist.  Despite all of these honors, Dr. Zimmerman remained, as he always was, an unassuming, modest, and unpretentious individual. When asked about his accomplishments, he stated that his greatest fortune was to be able to interact with so many of the young, brilliant and talented physicians and scientists over the years. Students of Dr. Zimmerman admired him for his honesty, in his scientific endeavors, in what he demanded of his students, and in his personal life. Through his work, Dr. Zimmerman was able to make seminal contributions to the practice of ophthalmology including the recognition of various entities causing leukocoria and the management of ocular melanoma, but his family remained his top priority. He and his wife, Anastasia (Stasch), had 6 children, 14 grandchildren, and 10 great-grandchildren. The Verhoeff Society honored Stasch for her support of the fellows and alumni meetings. Dr. Zimmerman died in Baltimore, MD, on March 16, 2013, only 10 days apart from his beloved wife