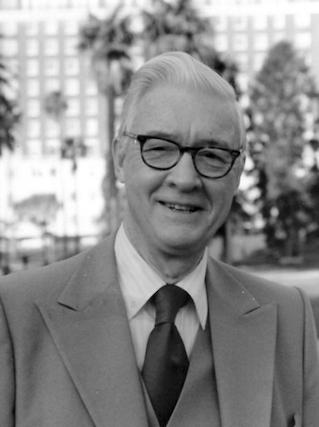 Marshall Miller Parks ( was born on 6 July 1918 and died on 27 July 2005). Marshall’s death marks the passing of the archetypal American gentleman pediatric ophthalmologist. With changing life styles, ambitions, ethics, and training we are unlikely to see anyone remotely similar. But many of his gifts in life have been passed on to the pediatric ophthalmologists that he influenced as surely as if the message were sent unerringly in a double helix. Born in Old Mission, MI, USA, son of Ruth and Reuben Parks, he was one of four siblings. He received his BS from Illinois College in 1939, and graduated from St Louis University School of Medicine in 1943 before entering the US Navy during the second world war, serving as a medical officer on destroyers in the South Pacific. He studied pediatric ophthalmology under Frank D Costenbader, the first American pediatric ophthalmologist, and they started the first fellowship program at what became the Children’s National Medical Center in Washington, DC. He held many other posts in Washington, DC, and later in Dallas, Texas, during his career as a full time private practitioner. Among many elected positions, Dr Parks was a founding member and first president of the American Association for Pediatric Ophthalmology and Strabismus and was president of the American Academy of Ophthalmology. Dr Parks’s academic contributions included the diagnosis and treatment of strabismus and amblyopia, description of the monofixation syndrome, the benefits of early strabismus surgery, the management of infantile cataracts, and innovative surgical techniques. He wrote several meticulously researched and illustrated books, contributed chapters to 30 others, and had over 70 papers published. He presented 45 named lectures, one of which was the 1977 Doyne lecture on “The superior oblique tendon.” Like other lectures that he gave, and the associated publications, it was clear, beautifully illustrated, contained observations based on his vast clinical experience, and one felt that he made things look so easy that if you just followed the rules he laid down you could not go wrong! He was an energetic person and a prodigious worker. Following him in his practice was not for the faint hearted: for about three days a week he saw the first patient at 07.30 then several patients an hour (all beautifully organized and drilled by his secretary with letters dictated at the end of the consultation and given to the patient before departure). He had half an hour for lunch and then saw patients through to 19.30. Academic work came after dinner and, if fortunate enough to be staying at his house, a visitor got to take part in that too! On top of his vast outpatient practice he had a very brisk referral surgical practice as a result of his meticulous and technically excellent surgery, and he served on numerous committees. Just to eulogise the work side of Dr Parks’s life is to miss the point. He and his late wife Angeline raised 11 children in a suitably sized house on Massachusetts Avenue, next to the British embassy. One son, Peter, predeceased him. He had 25 grandchildren and 10 great grandchildren. He had a strong religious faith and was a great family man, most relaxed when surrounded by family and ready to move mountains for any of them. Dr Parks had a summer retreat in Maine, which he referred to as his “sacred place.” There, work and teaching were never far away, though, and many pediatric ophthalmologists went there in the summer months to take part in teaching and learning sessions. Marshall could listen and, although it was rather difficult to get him to change his views on a subject, once he did he gave credit to who had changed them. He had that great knack of making one feel that one was the only person at that moment that he was engaging with. He was sociable and liked to share with guests his passion for the occasional strong martini. His legendary sense of humour even survived when, over a mistake in the Anglo-American meaning of the word quite, he was booked into the most expensive suite in the most expensive hotel in London! Angeline and Marshall made a great team with common goals and a shared philosophy of life that their children have benefited from and thus Angeline’s death left a big gap in his life. Later, he had the great good fortune to meet and later marry Martha, also distinguished in her own right, who formed another enduring anchor point till the end of his 87 year long and fruitful life in July 2005. “Happy are those who have died in the Lord; let them rest from their labours for their good deeds go with them